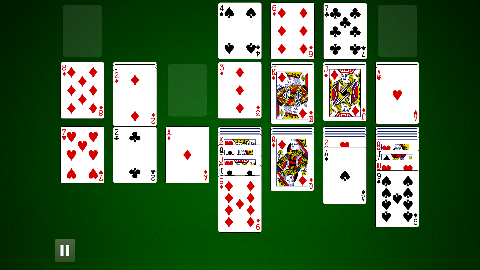 Agnes Solitaire is a variant of the popular Klondike solitaire that provides a refreshing and greater challenge over the popular classic.

Agnes Solitaire is available for Android

A brief history of the card game known as Agnes Solitaire

There are two versions of Agnes, "Agnes Bernauer" and "Agnes Sorel". The game Agnes Bernauer was named after the mistress of Albert III, Duke of Bavaria. She was drowned in the Danube River on the orders of the duke's fater who was unhappy with their relationship.

This version of Agnes Solitaire defaults to the Agnes Bernauer version that was created by David Parlett, although it is possible to play the Agnes Sorel version by changing the game settings to build the tableau down by colour and setting the empty spaces to not filled.

The objective of the card game Agnes Solitaire is to move all the cards to the foundations at the top of the screen.

The first twenty eight cards are dealt face down into the tableau of seven columns to form an inverted triangle, then the top card of each tableau is then turned face up (just like in Klondike). The next card is placed face-up in the first of the four foundations at the top of the screen. The rank of this card becomes the starting rank for placing cards into the foundations for the other three suits. Foundations are built in ascending rank by suit, wrapping from King to Ace.

The game plays in a similar way to Klondike.

Empty spaces can only be filled with the card that is one rank lower than the foundation starting rank, unless otherwise changed in the game settings.

The columns on the tableau are built down in descending rank in either alternating red/black colours, or the same colour depending on the game settings.

When no moves are available another set of seven cards can be dealt from the stock in the top left corner of the screen to the reserve, unless there are no remaining cards in the stock.