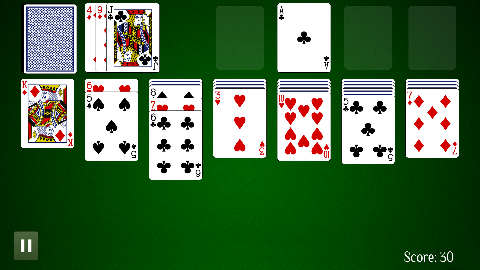 The classic card game Klondike solitaire that has been specifically designed for touch-screen enabled devices.

Klondike Solitaire is available for Android

A brief history of the card game known as Klondike Solitaire

Klondike Solitaire is usually known just as Solitaire and is one of the better known of the family of solitaire/patience card games. The game has been around since at least 1902 and it might have been named for the Klondike gold rush of the late 1890s. Klondike is also known as Canfield, named for Richard Albert Canfield who ran several gambling houses and at one time was "the best known and wealthiest individual gambler in the world."

The objective of the card game Klondike Solitaire is to move all the cards to the foundations at the top of the screen.

The first twenty eight cards are dealt face down into the tableau of seven columns to form an inverted triangle, then the top card of each tableau is then turned face up.

The four foundations at the top of the screen are built up by suit from Ace through to King.

The columns on the tableau are built down in descending rank in alternating red/black colours.

Multiple cards that form a run of alternating colours can be moved together.

There are different ways the game can be configured for drawing the cards from the stock:

When there are no more cards in stock the cards in waste can be turned over and placed into the stock pile to allow them to be drawn again. The game can be configured to specify how many times you can go through the deck: