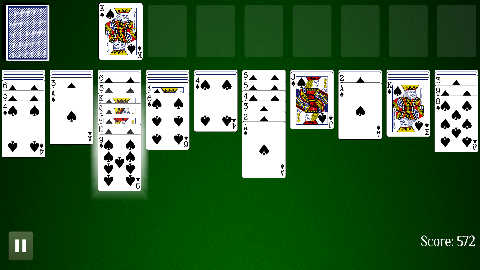 The classic card game Spider Solitaire is one of the more popular two-pack patience type of card games.

Spider Solitaire is available for Android

A brief history of the card game known as Spider Solitaire

The game is usually known as just "Spider", but there are a number of variations known by the same name, in fact, "Spider" is more of a generic name for any kind of patience card game where the sequences are built within the layout as opposed to building on the foundation cards to the centre. So for this reason the name "Spider Solitaire" is used to refer to this specific variant of a Spider patience game.

The objective of the card game Spider Solitaire is to order all of the cards in descending order from the King down to the Ace where all the cards are in the same suit. Once a run has been completed then that whole run of cards is removed from the playing area and placed into one of the empty foundations at the top of the screen. Note: This occurs automatically, the foundations are not built upon directly.

At the start of the game the cards are shuffled then the first 54 cards are dealt face down into ten tableaus. The first four tableaus (columns of cards) have six cards each and the remaining six tableaus have five cards each. The top card of each tableau is then turned face up. The remaining 50 cards are placed in the stock pile at the top left of the screen.

Move the cards on the tableus following the valid moves below with the goal of arranging cards of the same suit in descending order from King down to Ace.

The last card in any tableau is available for play onto the cards in another tableau where that card is one higher in rank. For example, you can move the 10 of any suit onto a Jack of any suit. However, only runs of the same suit will be removed from the play area.

Multiple cards that form a run can be moved together if they match the "Move Card Group Rule". The standard rule is that runs must be of the same suit, but this version of the game allows you to make it a little easier. One of the following options can be chosen: Same suit groups, Same colour groups, Mixed colour groups.

In this version of Spider Solitaire any card or movable run can be moved into an empty tableau.

After a card, or run of cards, has been moved to another tableau or removed from the play area, if the remaining tableau only contains face-down cards then the top-most card is turned face-up.

Once you have finished moving the cards and filled any empty tableaus new cards can be added to the play area then click on the remaining card stock at the top-left of the screen. This will deal ten cards face up, one into each tableau.

For example:
You have managed to remove three runs from the play area and played 60 moves then your score is 740 points: